National hockey action comes to the city next week when the 2016 South African Masters Hockey Tournament gets under way in East London.

Last year’s SA masters hockey tournament took place in Potchefstroom, with Border Masters hockey making a presentation at the Annual General Meeting before the tournament. On the basis of that they were awarded the right to host this year’s edition. 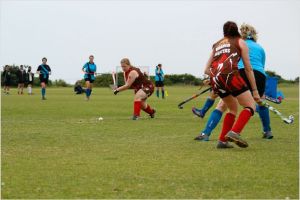 Ladies in action at the Masters Tournament held in June 2014

Since returning from that tournament, Border have been hard at work getting everything up and ready.

“We are ready to host a great SA Masters tournament,” Chairman of the organising committee, Kevan McDougall said.

The last time East London hosted the Masters was in 2006, so it will be a welcome return to the city for hockey enthusiasts.

“I think this is about the fifth Masters tournament that we will be hosting. The city is well-suited to host any sporting tournament, because the East London people know what they are doing. The backing we have had from local businesses and the tourism department has been superb,” McDougall said.

The tournament, set to be played from next Friday to the following Monday, will parade some of the best senior hockey talent.

“The A division, which we call the Colts division, is on a par with our premier division hockey here in East London and that is the hockey you can expect at the tournament,” McDougall said. In all, 66 teams and over 1000 hockey players will be participating.

There will be men’s and women’s categories.

Teams from Namibia, Zimbabwe and Ghana are set to join provincial teams from across the country.

“We are not sure how good the teams from Namibia and Ghana will be as this is their first time playing in the tournament, but it is good to have them,” he said.

However, a few matches of each will be held at either venue.

Other venues where games will be played are Stirling, Selborne and Cambridge school astros, along with the main two venues.

Divisions B to G on the men’s side and B to D in the women’s will be played across these venues.

Matches will also be played on a few grass pitches at the various venues.

Border will be competing in the A division on the women’s side and the D division in the men’s.