In exactly a week’s time stellar Masters hockey action will be kicking off across East London when the South African Masters Hockey tournament officially gets under way. 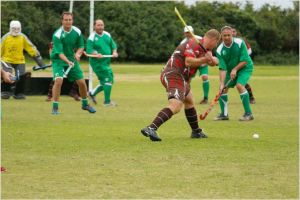 Men in action at the Masters Tournament held in June 2014

The massive tournament featuring 66 teams in the men’s and women’s division, coming from across the country and internationally from Zimbabwe, Namibia and Ghana will bring over a thousand of the best masters hockey players from the various regions to the city.

It is a big tournament for hosts Border, whose women’s A Masters side will head into the tournament as defending champions after they cruised through the tournament last year in Potchefstroom undefeated, and they will want to keep the title especially playing at home.

“We have had a a very good run over the last few years,” said A team captain Gill Barbour.

“We are very excited to have the tournament in East London. The A section has a high calibre of athletes so we two and drawing one and competing in the D division they will want to put in some impressive performances and hopefully win their division.

“We had a really good year last year across all of our teams and with home ground advantage we hope that we can have another good tournament here,” said Barbour.

A Border invitational men’s team will also be included this year to make up the numbers in one of the pools – bringing the local participation to four teams in the tournament.

“We are hoping to see a lot of support from friends and the general hockey public,” said Barbour.

Matches are to be played on various astroturfs and grass fields around EL and will see some fierce action in the various divisions.

Teams will arrive in EL next week Friday, with the SA Masters annual general meeting set for Friday night.

Next week Saturday, Sunday and Monday will then see the tournament battled out and the various champions should be crowned by late Monday afternoon.