The final day of Masters hockey action was battled out across East London yesterday as 66 teams from around the country as well as Zimbabwe, Namibia and Ghana played their final fixtures of the 2016 South African Masters Hockey Tournament.

With over a thousand players in the men’s and women’s divisions of the competition the hockey extravaganza came to an end with the awards dinner last night. 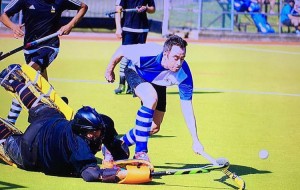 Men in action at the 2016 Masters Tournament

“We have had a good run, the weather has been good, with just a sprinkle of rain this morning, games have been exciting and the after-hours parties have been great, so all round it has been a fantastic tournament,” said chairman of the organising committee Kevan McDougall.

“We have been receiving fantastic feedback from all the teams involved, so it has been a roaring success.”

With teams competing in divisions ranging from A to G on the men’s side and A to D on the women’s side, only the A divisions play for medals, with the other divisions playing for the enjoyment of the game.

On the men’s side the Western Province Colts team came out on top at the end of the weekend. They gained four wins and only lost to the Border Invitational team.

For the women it was the unbeaten Southern Gauteng team which took the honours, taking over from defending champions Border, after they claimed four wins and a draw over the tournament. By Sunday night they had basically sealed the division with wins over WP 2-1, EP 4-0, Zimbabwe 4-1 and KZN 5-2.

Their final match was against Border and the two sides ended all square at 0-0 which was enough for them to take the title.

Border, despite also ending unbeaten over the tournament, drew too many games as they finished with two wins and three draws.

The Border men finished with three wins and two defeats in their five games and plenty of goals were scored during their matches. They opened with a big
6-2 win against WP Cart Horses and then beat Northerns Flyers 3-2.

A high-scoring match against Ghana followed as they went down 6-3 but bounced back to thump Diggers 7-1 before ending the tournament with a 3-0 loss to Southern Nuggets.

The Border women ended the tournament with four wins and one loss, which was a solid showing in the end.

They went down 3-2 to East Rand in their opening game but followed up with wins over Eastern Gauteng 3-2, Boland Flames 2-1, Foh Fusion 2-1 and KZN Inland 3-1.

In total 330 games were played in the tournament over the three days.

“It was great to have the tournament here, we are not sure when it will be back as it will go around the country again but I think we have hosted a really good event and the teams will leave having had a good time and feeling satisfied,” said McDougall.