Border teams were out in full force yesterday as they played out their final fixtures of the South African Masters hockey tournament in East London. 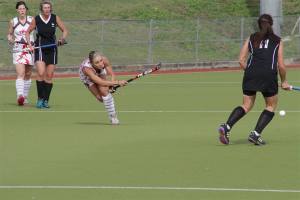 Ladies in action at the 2016 Masters Tournament

“I am very happy with the way our Border teams played over the tournament,” said Border Masters chairman Lance Casoojee.

“It was a very competitive and fun tournament and our teams showed across the board that they are in good shape and can mix it with the best.”

In their early match the Border Women battled out an entertaining 0-0 draw against the champions elect Southern Gauteng team, with both sides giving their all, but some inspired keeping kept the game goalless.

The Border women then played a massive derby against EP to end their tournament on a high as they claimed a 2-1 win over their neighbours.

Both teams had chances in the opening minutes with a few penalty corners and goalmouth scrambles seeing both sides come close to scoring.

Border then finally broke the deadlock in the 20th minute as from a penalty corner the ball was moved out and then back in to Natasha Luxon on the left-hand post with her sweeping the ball home.

Border then had a last second short corner before halftime with the chance just going wide.

A fast start to the second half from Border saw them double their lead after two minutes as another short corner move saw the ball crossed in to Lou van der Vyver to deflect home.

EP then reduced the deficit in the 40th minute as the third goal of the game from a short corner was scored with Bev Duckworth applying the finish.

The Border Invitational men played to two exciting draws three-all against KwaZulu-Natal and two-all against Southerns.