Masters hockey action is just two days away as the South African Masters tournament prepares to get going across East London on Saturday.

There will be a distinctly local flavour at the event, with Border Masters Hockey hosting and nine teams out of the 66-strong contingent coming from the Eastern Cape. 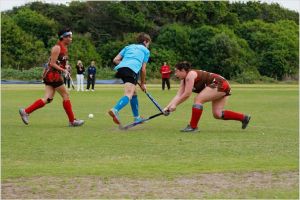 Ladies in action at the Masters Tournament held in June 2014

Border will feature an Invitational side in the men’s Colts division and their main Masters team in the D division, while Border women will have sides in the A division and the C division.

“We had to bring in a few under- age guys to make a competitive side that would take part in the Colts division, so the Border Invitation side will not be playing for points but just to make up the numbers and give the other Colts sides a run for their money,” said chairman of the organising committee Kevan McDougall.

“It is a good team with a few Premier League guys in, so I think they will acquit themselves well and make things interesting for the visiting teams.”

Five sides will make the trip from Port Elizabeth to take part.

On the men’s front the Eastern Province Colts team will lead the charge while the EP Masters team competes in the E division and the EP Veterans team in the F division.

“With East London just down the road it does make things easier and it is always exciting having these types of tournaments in the province,” said EP Colts captain and coach Adrian Kemp.

This year the EP Colts team will aim for a couple of wins and improve on their results from the last few years, with Kemp admitting they have been in a building period.

“The level in the Colts division is very high. Western Province always has a very strong side but in general all the teams competing in the division are good,” said Kemp.

“We have been in a rebuilding phase the last few years and have slowly been getting more and more competitive, which is exciting, and we want to get a good couple of wins this time around.”

On the women’s side the EP Angels will contest the A division, while the EP Legends will take part in the D division.

“It is a home tournament as such and the team is looking forward to it,” said EP Angels coach Sandy Fisher Hill.

“Most of the team has been playing premier league hockey this year so the experience and exposure to that will definitely benefit them in the Masters.”

A cracking match will be on the cards with Border taking on the EP Angels in both the teams’ last match of the tournament next week Monday.

With the Border women aiming to retain their title and EP Angels not wanting to let their neighbours get one over them, it should be an exciting climax to the division.

“The Masters is always extremely competitive, but we are really looking forward to the last game against Border, which should be a massive match,” said Fisher Hill.

The tournament gets under way on Saturday morning and will conclude on Monday afternoon.